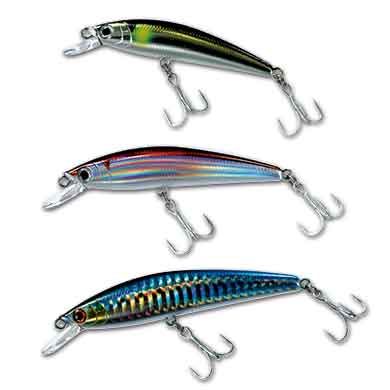 In 1994, Wavy was released as a pioneer of the domestic production saltwater sinking minnow. Wavy, which was a specially designed minnow at that time, was remarkable for fishing from light games to sea bass and gained the support of many anglers.

Eventually, Japanese saltwater games became more diverse, and lures became more fragmented. And in 2011, Wavy was renewed more realistically. Equipped with hooks (made by Owner-Cultiva) that are best suited to their respective targets. And the color lineup is renewed. The wave that created the era moves to the next stage.

In the plugging game in the bay area and reef, the minnow requires strength because it aims directly at the tetra, bridge girder, reef, etc., which are points.

For the lure, the line eye plays a very important role in controlling the movement, and even a slight change spoils swimming. The wavy lip attached to the front of the conventional minnow protects the line eye and at the same time realizes a sharp start, so it is safe to attack the point you think is right.