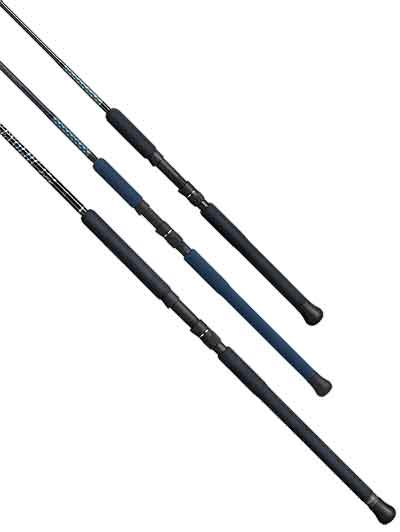 It's like a tough spring. Offshore stick GTK, a rod with strong elasticity

The offshore stick GTK has Kevlar on the tip side and titanium fiber on the butt side, with the point at the top of the bend as the contact point, and the entire rod has a spring mode. With this design, a strong elasticity that repels momentarily during casting creates an overwhelming flight distance, and during fighting and lifting, it has excellent self-restoring force that attracts fish even if it supports the rod against the strong pull of the fish. , Reduces the energy loss of anglers.

The offshore stick GTK, which is the successor model to the first offshore stick GSS, is a new Smith original material GTK (graphite titanium & Kevlar) that is made by winding a composite material of 30 tons + 40 tons graphite using the same manufacturing method as WGJ and incorporating titanium and Kevlar. High elasticity and high strength rod using 30-40.GTK30-40 is 25% stronger than the same material as the conventional one, the rod diameter can be reduced by about 9.5%, and the point that becomes the peak of bending at the time of casting in the maximum allowable range (in this series, the butt guide With the upper guide) as the contact point, Kevlar with a spiral tip side and titanium with a tight vertical butt side provide a powerful spring mode throughout the rod.With this new design, the speed of repulsion caused by the strength of the load applied to the rod follows the load in synchronization with the load, so it is powerful and repels momentarily against a large load that is applied quickly and instantly during casting. Due to its elasticity, it creates an overwhelming flight distance, and when operating the lure, the load load is light and the tip section returns slowly, so the weight of the lure can be comfortably placed.On the other hand, during fighting and lifting, it has excellent self-restoring ability that makes use of the high repulsive force peculiar to the highly elastic material that attracts the fish just by supporting the rod against the strong pull of the fish, and even the energy loss of the fisherman is reduced. increase.The SJ model was tested in the waters near Japan, and the GTK-74PG was tested in the waters near Japan and the Maldives over a period of about two years.

Main target fish: Medium-sized migratory fishMaximum load: 7 kg (rod angle 45 degrees), 4 kg (rod angle 90 degrees)A ​​surface jerk rod developed by focusing on the amberjack in the outer bunch. When it comes to amberjack compatible rods, the rod tends to be powered up as a whole, but when the tip power is raised, the plug pops out of the water surface and finally misses the bite of the tracked fish, so this model is designed to suppress the tip power as much as possible.

Main target fish: 40 kg class yellowfin tuna, medium-sized migratory fishMaximum load: 8 kg (rod angle 45 degrees), 4 kg (rod angle 90 degrees)A ​​surface jerk rod developed by focusing on the yellowfin tuna with a pencil minnow plug. The tip power is suppressed as much as possible, a long cast of a lightweight plug of about 60 g is possible, and the belly and butt section are powered up to cope with strong pulling. For GT and bluefin tuna rods, it is recommended for anglers who seem to be heavy.

Main target fish: Large dolphin fish, small and medium size migratory fishMaximum load: 7kg (rod angle 45 degrees), 4kg (rod angle 90 degrees)It has a potential that cannot be imagined by appearance, and can fully cast heavy lures, not limited to plugs and metal jigs. Long caster. Even with a lure of around 80g, the average flight distance well over 90m is the true value of this rod. The fast taper, which is good for remote control over long distances, allows you to jerking, diving, and popping plugs as you like.In addition, it is a powerful rod with a wide range of defense that can handle long jerks of metal jigs.

Main target fish: Yellowfin tuna, amberjack, large dolphin fish, etc.Maximum load: 7 kg (rod angle 45 degrees), 4 kg (rod angle 90 degrees)Amberjack, etc. that migrates in shallow water areas along the coast, hard jerk with pencil plug A model for aiming with yellowtail and popping. Developed based on 74PG, which has a high reputation for both achievements and reliability.The tip power that makes the popper with high resistance function without difficulty is also suitable for casting and jerk of heavy metal jigs.

Blank: A high-elasticity, high-strength blank using Smith's original new material GTK (graphite titanium & Kevlar) 30-40, which is made by winding a composite material of 30 tons + 40 tons graphite using the same manufacturing method as WGJ and incorporating titanium and Kevlar. Compared to the same material as the conventional one, the strength is increased by 25%, the rod diameter can be reduced by about 9.5%, and the point that becomes the top of the bend at the time of casting in the maximum allowable range (in this series, the guide on the butt guide) is Kevlar with a spiral tip side and titanium with a tight vertical butt side on the contacts provide a powerful spring mode throughout the rod. The base color of the blank color is clear black, and when exposed to the sun, Kevlar and titanium become clear.

Grip: Since the slender grip is easy to apply force, it has excellent holding and casting properties (this shape is the best for armpit operation such as popping), and the material is medium hard EVA. The reel seat is a long nut with anti-slip processing and an up-lock specification with a sleeve. The seat is also a slender type so that it is easy to apply force. 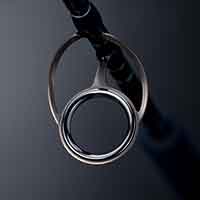 Guide: All models have Sic ring and triple wrapping specifications, and the butt guide is reversed to reduce the entanglement of the PE line.